The term Greek in the title Greek Orthodox Church is a reference to the historicity of the Orthodox Church.  It was within the experience of the Hellenized world that God chose to initially plant His Church.  By referring to the Church as Greek or Hellenic, we affirm the experience of the Orthodox Christian Church as the living continuation of the Church founded by Jesus Christ and His Apostles.  To learn more about the Hellenic soil that God nourished and planted His Church in, the following article is offered for your educational enjoyment: 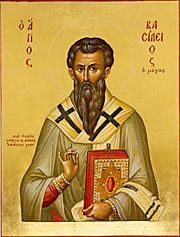 Of Plato and Plowshares: What is Hellenism?

We all know the Parable of the Sower. The sower casts seeds everywhere, but only in the good soil does the seed flourish. Of course, good soil isn’t good by accident! Something happened to prepare the earth for the seed. In this parable the seed is the Gospel, the sower is the evangelist, and the soil is the human heart. But what is the plow? What prepares hearts to accept the Truth of Christ?

Historically it is a fact that in the ancient world the Gospel fared best where Hellenism was the strongest. Hellenic culture was the plow that prepared hearts for Christianity. When the Gospel seed fell in areas not well Hellenized—among the Germanic tribes, throughout Persia, in Jerusalem, in Arabia—the seed sprouted only to yield bitter fruit: Arianism, iconoclasm, legalism, and Islam. But wherever Hellenic values were accepted and celebrated—there, historically, the churches planted by the Apostles stayed Orthodox in their worship and theology, century upon century.

And so it is worth thinking about what Hellenism is and how Hellenism prepared hearts for the Word of God. Hellenism is not about olives in our salad and line dancing in costumes. Hellenism is above all a frame of mind, an outlook on the world that shapes every experience. To understand Hellenism, you have to know something about the ancient world in which it developed.

There were two kinds of societies. There was the tribal way of life, where people lived with their clan, and religion was a form of nature worship. Humans lived in fear of the spirits all around them, and worship was placating these spirits. Then there was the life of the ancient city-state, where people were organized into a society of different classes—the merchants, the artisans, the priests, the rulers, and the serfs and slaves. Fear of nature was replaced by fear of the king, who received worship as a kind of god, with absolute power of life and death over his subjects. And so whether you lived in the wilderness or in civilization, the operative principle of your world was fear—fear of “divinities” who menaced mankind either as natural elements or as tyrants.

Not so among the ancient Hellenic people. For them fear was replaced by wonder. Yes, they worshipped many gods. But when looked up at the sky and watched the movements of the stars, they did not just see supernatural forces at play. They saw mathematics at work. They saw geometry and physics and chemistry. And seeing this, they did not cower in fear. They rose up in wonderment, and in delight. And they explored and experimented and examined this wonderful world.

To be sure, other ancient peoples, like the Egyptians and the Babylonians, had some knowledge of astronomy—but they always used this power to suppress the masses with fear of the king’s divinity—as if Pharoah or Nebuchadnezzar were the ones controlling comets and eclipses. The Greeks would have none of that! Their kings were revered, but not as gods. For the Greeks, science—and the sense of wonder that inspired it—were tools for progress, not weapons of enslavement.

And so in the ancient world, the Gospel of a God Who is a heavenly Father, who is universal and is tied to no dynasty in particular, Who loves us as children, and in Whose love there is no fear, for “perfect love casts out fear” (1 John 4:8)—this was a message that the Hellenized world was ready to hear. This was a God worthy to be worshipped as the Creator of the “wonder”-full world which they inhabited … the “kosmos,” as the Greeks named it, meaning the thing of beauty and design. The Greeks saw the world, not as the battlefield of a hundred warring deities, but as the lovely sculpted artwork of a wise and beneficent Mind. And so in the teachings of Jesus Christ, they recognized the loving Creator God of their science.

But what about Greek religion, with its polytheism and all those funny myths of gods coupling with humans and turning out demigods like Heracles? Indefensible, of course, and yet . . . within the strict and absolute monotheism of Judaism, there was no room for the experience of God as Father, Son, and Holy Spirit. Hellenic thought, by contrast, was not only ready for the message of only one God, but it was also equipped to receive the revelation of one God in three persons. Likewise, the Incarnation made no sense in the mindset of Judaism, where God was so apart from this world that the thought of an eternal union of human and divine in one person was utter blasphemy. For the Hellenic mind, shaped by the stories about Olympians interacting with mortals, the concept of the Incarnation was less of a stumbling-block.

But it was not so much Hellenic religion that prepared the soil as it was Hellenic philosophy. And here we can speak of an achievement that no other single culture before or after ever came close to matching. The science of knowledge, the discovery of the mind, the refinement of human curiosity—and the recognition of its limits!—these are some of the unique accomplishments of Hellenic philosophy. And so profound was the influence of that philosophy in the ancient world, that it left some noteworthy marks upon the young religion of Christianity.

The first was in the fact that the early Christians did not speak of their movement as a threskeia (“religion”), but rather a philosophia. The Church Fathers viewed Christianity as an extension and perfection of Greek philosophy, a complete way of life guided by wisdom. For them, true faith was the application of God-given reason to the data of God-given revelation in the Old and New Testaments. And the black robe of the clergy in our Orthodox Church, the exorasson, is nothing else but the early Church’s adaptation of the plain, unadorned garb of the philosopher, the uniform for those who spurn outward ostentation for the inner beauty of wisdom.

But perhaps the chief contribution of Hellenic philosophy to the ancient world was the idea of virtue, or arete, and of ideals that are greater than life: truth, justice, integrity, liberty. Elsewhere in the ancient world men fought and died for gold, for cattle, perhaps even for love. Rarely did one find a man laying down his life for his ideals. But for the Hellenic mind this was the height of virtue—as exemplified by Socrates, by the Spartans at Thermopylae, and by Pheidippides, who ran himself to death to bring news of the battle of Marathon. To lay down one’s life voluntarily for the common good was one of the great themes of Hellenic culture. The self-offering of Jesus Christ and the voluntary sacrifice of the early martyrs were not alien to Greek ideals. The Son of God who lays down His life for His friends (John 15:13) is to the Hellenic mind the consummate possessor of virtue.

As Orthodox Christians, we give thanks both for our Jewish roots and for our Hellenic heritage. To disdain Hellenism, as do some Orthodox in America, is to despise one’s grandmother. It is a rejection of the heavenly Father, who through the Greeks prepared the world for His evangelion of a “perfect love that casts out all fear” (1 John 4:18). Thanks be to God for Greeks bearing gifts, ancient gifts of wonder and wisdom that prepared our hearts to receive the Gospel!

If you would like to make a donation please choose an option below:

Donate to the Church